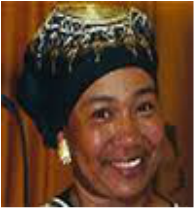 Hajja Khayriyyah H. Faiz, was one of  Sisters United In Human Service, Inc. founding members and the first President of the Organization.   Her love for service, for giving and for providing the selfless caring services for others, regardless of age, race, gender or life circumstances  was evident in her daily life.   She never gave less than what she asked of others.  In the tradition of The Prophet (SAWS) "The Most beloved of Allah are those who Most Benefit the Creation".  This was our dear beloved friend, companion, Khayriyyah.  Sisters United In Human Service, Inc. will always be grateful for the gentle spirit that she was.  This organization was one of the many ways that she was able to invite others to be in service -doing and working for the "Pleasure of Allah".

During the 14 years as President of Sisters United In Human Service, Inc., Khayriyyah, held a full time job as an active member of the Academy of Certified Social Workers and as a Licensed Clinical Social Worker, a Master Addiction Counselor, and a Certified Criminal Justice Specialist.  In addition, she was a very dedicated business woman, philanthropist, counselor, writer, speaker, consultant, floral designer and author of the book-"Becoming the Honorable Sister".  She seem to have had an untiring spirit always willing and able to give to others of herself, her knowledge, resources, and abilities to provide support and inspire the best of everyone she touched.

Hajja Khayriyyah was affiliated with several organizations including but not limited to:  The National Council of Negro Women, Speakers Bureau, Disabilities Network, World Pilgrims, and the Atlanta Interfaith Broadcast Network.   Prior to her retirement from Georgia Regional Hospital in 2008, she served as the Special Assistant to the Regional Hospital Administrator, in conjunction with being the Service Director II of Mental Health and Mental Retardation, simultaneously.

During her lifetime she received numerous achievement awards and has been recognized by many for her service to humanity.  In fact,  Khayriyyah received The State of Georgia's Faithful Service Award of Excellence, The Crown of Peace Award, which was presented by the Interreligious and International Federation for World Peace.  She received The Atlanta Business League's Leadership and Community Service Award; The Excellence in Health Care; Women Working Together, Inc.  Award; Women in Community Service Award from the Concerned Black Clergy;  SUIHS, Inc. Achievement Through Sacrifice Award; The Muslim Journal A Time To be Grateful Award and several awards and other types of recognition from groups throughout the United States.

This short summary is intended to give our readers a glimpse into the personality and spirit of a very special person to each of us.  Hajja Khayriyyah Faiz can best be described as one who sincerely wants for others nothing less than what she wants for herself.  She always strove to be her best at every task and would often say to others "we have to raise the bar."